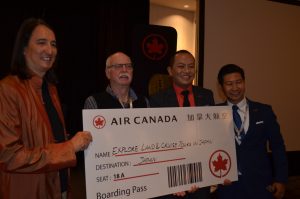 The growing number of opportunities to spend a holiday in Japan onboard a cruise ship were reviewed during a dinner event in Vancouver hosted by Marco Polo Tours, Air Canada and the Japan National Tourism Organization.

Travel professionals, supplier partners and their clients gathered for the presentation at the Hyatt Regency.

Reps from four cruise ship lines attended the evening event and were given time slots in which to describe services and cruise itineraries. These included NCL, MSC, RCI and Princess. The Diamond Princess, for example, has been reinvented for the Japanese market, said Princess business development manager Wade Menard. It features Japanese cultural programming, entertainment, Japanese cuisine, sake testing and even onsen options.

Japan is a country whose economy was built on overseas trade, so many of its major cities are located on the coast as ports, said presenters. That makes it an ideal country to visit by cruise ship, said Jackie Ma, president of Marco Polo. Ma also encouraged visitors to explore the Tottori region of Japan, which is known for its unusual sand dunes geographic features.

The post Japan Cruising in Spotlight at YVR event appeared first on TravelPress.